What does Chianti taste like? Pairing Chianti with pizza 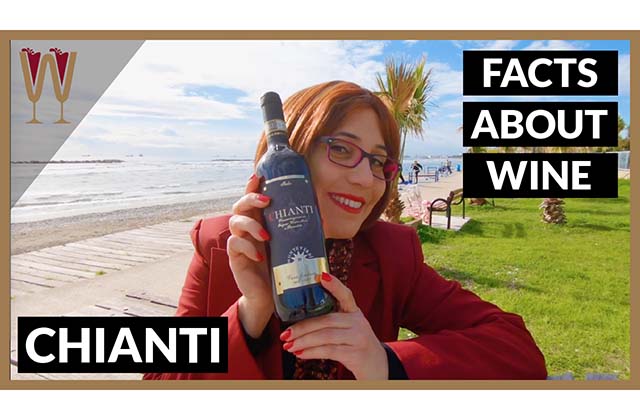 What does Chianti taste like? This favourite Italian wine is the topic of today’s video. What wine pairs with pizza? Chianti of course. And have you ever wondered about that sticker of the black rooster on every bottle of Chianti Classico? In this video WineScribble shares her facts about Chianti wine, including the story of the knights from Florence and Siena. Enjoy the wine video!

Do you love pizza? I do. I used to balk at the idea of pairing wine with pizza. It wasn’t wine snobbery, pizza can deliver a jumble of flavours all at once.

I have always wanted to pair pizza with wine, but I kept thinking to myself what wine could possibly cope? This one, Chianti. Yes, it is true, if they grow together, they go together.

Chianti then, here are my fast five facts. What does Chianti taste like? Let’s find out.

Chianti is not the name of a grape but of a wine-producing region in Tuscany, Italy. The main grape used to make Chianti wine is called Sangiovese. It derives its name from the Latin ‘sanguis jovis’ which means the blood of Jove or Jupiter.

Sangiovese is an indigenous Italian grape variety and by far the most widely planted red grape in Italy.

By law a wine can only be called Chianti if it is a) produced in the Chianti region and b) made with at least 80 percent Sangiovese grapes.

Most Chiantis are made with 100 percent Sangiovese. However, some producers blend in other varieties such as a little Merlot or Syrah. Or, Cabernet Sauvignon along with the Sangiovese to help soften down the final product.

In the 19th century Baron Bettino Ricasoli, who later served as Prime Minister of the country, first developed the official recipe for Chianti. He stipulated that Chianti should be made from 70% Sangiovese, 15% Malvasia Bianca and 15% Canaiolo.

Is anybody else craving pizza?

If the label indicates simply Chianti, then the wine has been aged for just six months in oak. Expect a young and uncomplicated red that is high in acidity.

If your Chianti is labeled Superiore then it has spent a year in oak. So, expect a much smoother wine with a rounder acidity and a more distinct character.

A Chianti Riserva indicates that the producer marked this out as worthy to be a special reserve. Chianti Riserva has spent two years in oak, which adds complexity and tempers the wine.

And finally the best wines from the region of Chianti Classico can be labeled Gran Selezione if they have spent two-and-a-half years in oak. This is the most complex and refined Chianti available.

Have you ever noticed that there is a sticker depicting a proud black rooster on the bottle of every Chianti Classico? Ever wondered why?

Locally this is known as Gallo Nero, and it is a powerful symbol.

According to legend, the cities of Florence and Siena each claimed the region of Chianti as its own. Therefore, they came up with a plan to solve this dispute once and for all without shedding a single drop of blood, or wine.

Each city picked a champion and a rooster. The champion knight would start riding his horse as soon as his cock started to crow the next morning. The border between the two cities would be drawn once and for all wherever the two knights met.

The Siena knight picked a white rooster and made sure the bird was generously fed, assuming that a full stomach would guarantee the loudest crow.

The Florence knight used the opposite tactic. He picked a black rooster and deliberately starved him.

So, what was the result? The overfed white rooster fell into a carb-induced stupor that required sleeping off. The starving black rooster however was keen and alert, and presumably quite irritated. He started crowing long before sunrise giving the Florence knight a decided advantage. But, the Siena knight had barely ridden 12 kilometers beyond the city walls when he ran into the sprightly and timely knight from Florence.

The new border was drawn, and the coveted region of Chianti now fell entirely within the region of Florence. The moral of the story? Never keep a cock fully satiated or it will be of no use to anyone.

What does Chianti taste like? Young Chianti can evoke a sense of flowers and baking spices. Aromas of cherries, plums and raspberries are typical, especially in young Chiantis.

The longer a Chianti is aged in oak barrels, the more it acquires aromas of leather and tobacco. Also, a good basic Chianti can age for up to seven years. The best examples of Chianti Classico can age for up to 20 years in the bottle.

Chianti is characterised by medium tannins and a moderate to high acidity. And it is this acidity that makes Chianti so food friendly. Chianti loves food that is often considered rather challenging to pair, such as tart tomato sauces, fatty red meats or strongly flavoured game. Or pizza.

What is your favourite pairing with Chianti? Comment below and let me know. If you’ve enjoyed these five Chianti facts, leave me a thumbs up, and share this video with a friend. Hit the red subscribe button below and YouTube will notify you every time there is a new WineScribble video.