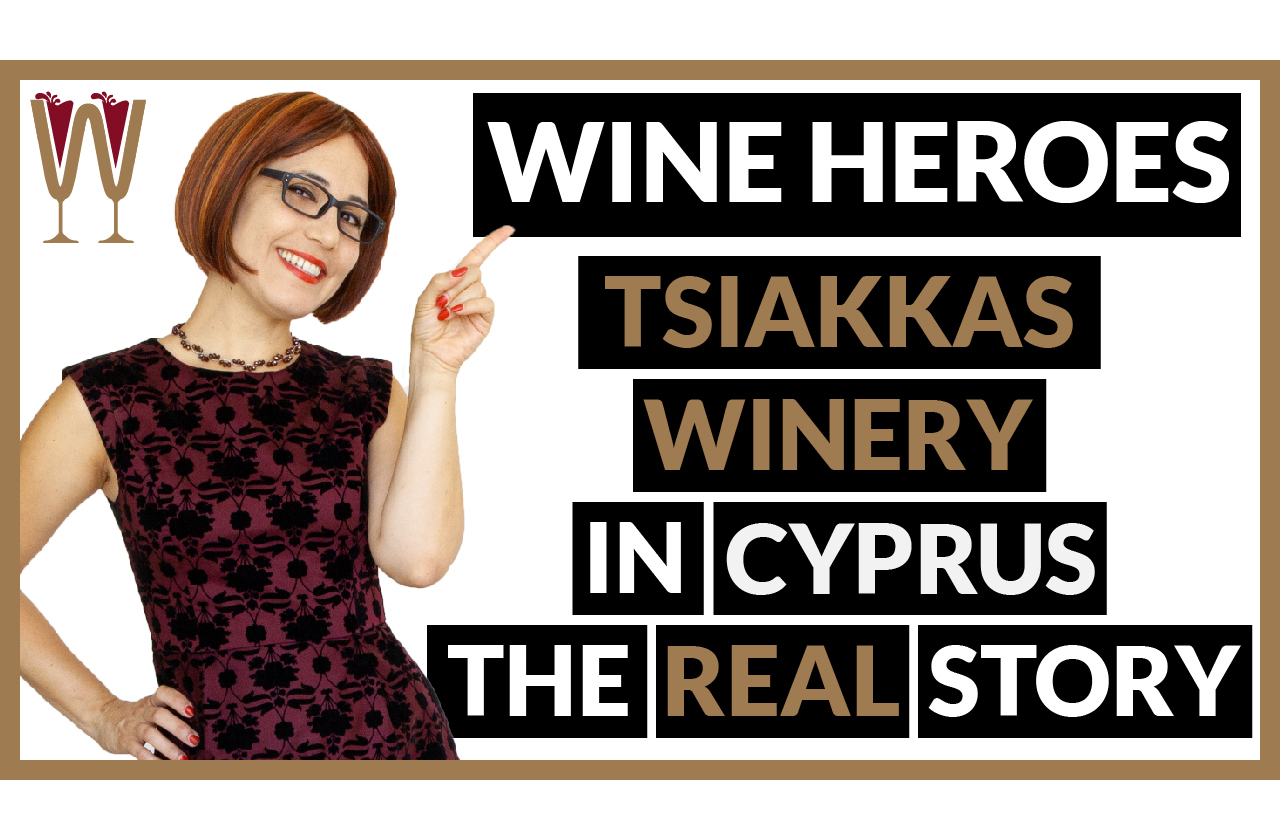 We went to the open day at the Tsiakkas Winery in Cyprus, on the Pitsilia Cyprus Wine Route. We tasted award winning Cyprus wine, commadaria and zivania. We also found a story of the amazing Tsiakkas Wine family, filled with the drama of a hailstorm in June in Cyprus and the inspirational tale of preparing for the future of boutique Cypriot winemaking. Alongside international grapes such as the Tsiakkas Sauvignon Blanc, we tasted local varietals Xynisteri, Vamvakada, Maratheftiko and Yiannoudin.

Hey Tasters! This video is totally different! Today we are going on a wine road trip! We have got everything ready. We just don’t know where we are going yet. Five of our favourite Cyprus wineries have opened their doors to the public this weekend. Vlassides! Kyperounda! Tsiakkas! Zambartas! Argyrides! It is impossible to choose! There is only one way to solve this problem. Let’s roll the dice. It’s a three! In envelope number three… I am so excited. Today… we are visiting… Tsiakkas Winery, in Pelendri village! Let’s have an adventure! Like Indiana Jones! But with Wine!

To get to Tsiakkas Winery we need to head West, to Limassol, and then follow the winding country roads upwards, as we climb half way up the Troodos mountains.

After a 90 minute drive, we arrive at the Tsiakkas winery in Pelendri village. The Tsiakkas family winery is surrounded by refreshing green forest, located on the side of a hill overlooking the family’s vines and fruit.

Our arrival at the winery coincided with a brief tour, led by the charismatic vigneron-in-chief, Costas Tsiakkas. The illuminating walking tour showed Mr Costas to be a fountain of knowledge on the history of wine and winemaking in the Eastern Mediterranean region. His love of wine and aspirations for the future of winemaking on the island are rooted in the historical context of the region.

As part of our walking tour, we visited the Tsiakkas cellars and barrel room. Temperature control of the Tsiakkas cellar is especially challenging. Although the winery site elevation is nearly 1000m, the thick stone walls are not enough to keep the cellar cool. Tsiakkas winery has placed solar panels on top of the cellar roof to absorb most of the heat. Even so, according to Mr Tsiakkas the air conditioning units work from May till October to maintain a constant temperature of 16 degrees.

The Tsiakkas Winery, established in 1988 by the husband and wife team Costas and Marina, is officially 30 years old. For the first 12 years, Marina Tsiakkas was in charge of operational management. In 2001, Costas left his job in the banking sector and joined full-time. However, the family has been a part of the wine-making story of the Pitsilia wine region for far longer. Costas Tsiakkas wove into his wine making legends the tale of his grandfather, Nicolas Tsiakkas, a skillful man, who provided for his family at a time of financial hardship in the region. Grandfather Tsiakkas acted as a negociant, or wine merchant who bought grapes from growers in the area. He blended Mavro and Vamvakada varietals to make a simple wine that he traded with the surrounding villages.

Fast forward to the present day and the future of the Tsiakkas Winery is already visible on the horizon. Costas and Marina Tsiakkas are the proud parents of two gifted young men. Their eldest son, Orestis, is an oenologist with degrees in chemistry and business studies, who has also studied Old World viniculture in France and Germany, with his final dissertation at Madrid Polytechnic University. Ektor, the younger son is currently an agronomy student at the University of Athens. Mr Tsiakkas explained that Ektor is considering further studies of New World viniculture in Australia or the USA. This is not a coincidence, but rather an intelligent response to the complexities that come with the history and terroir of the Cypriot winemaking regions.

Historically, Cypriot wine is made in the Old World style, tannic and food-friendly. The hot, dry climate, however, produces fruit that is ripe, and high in sugar, more similar in taste to New World grapes. A new generation of Tsiakkas oenologists cover both halves of this equation. The wine scene on the island of Cyprus is changing shape, with a focus on indigenous varietals and a renewed emphasis on quality, and the Tsiakkas family are getting ready to meet the new challenges.

The family vines are north-facing, their roots burrowing deep through the sandy, volcanic soil of the Troodos mountain range. There is a little rain and occasionally some snow, but the biggest challenge is the constant threat of drought, a perpetual problem on the island of Cyprus. But, as any wine producer and vine grower can testify, in this industry one must always prepare for the unexpected: nobody could have predicted a hailstorm to take place in June, in Cyprus, but last week that is exactly what happened, decimating 50% of the Tsiakkas’ family Yiannoudi crop and 40% of the Merlot vines. To safeguard against such occurrences, the family continues to also trade as negociant, working with vine growers from all over the island, collecting a range of international and local grape varieties. Their passion, however, is to revive local grape varieties that were neglected and driven almost to extinction, such as ‘Yiannoudin’, Vanvakada and Promara.

Tsiakkas family has recently purchased the adjacent slope and has already cleared it and dug out the traditional stepped domes. In the coming months the soil will be nourished and prepared to receive new rootstock of yiannoudin and xynisteri by the spring of 2019. The aspect of the new slope means it will receive direct sunlight in the afternoons which is more suitable for the less hardy Yiannoudi varietal. The family are expecting to sample the first wine by 2023 and to produce labelled bottles of their new Yiannoudi product by 2024.

At the tasting room, we met the oenologist Orestis Tsiakkas. We were delighted to taste award winning products such as the Tsiakkas Zivania and the Tsiakkas Commandaria. Traditional zivania is a distilled spirit, often made in the style of an aperitif, sharing similarities with Greek ouzo. Tsiakkas zivania however, is different. It is as complex as a French Cognac. Made with xynisteri grapes, it is unique in that it is aged in Commandaria barrels for 12 years. Which imparts an astonishing rich flavour.

Tsiakkas Commandaria itself is a silky, sweet wine. Late-picked grapes are partially dehydrated in the sun. Fermentation is slowed down by keeping temperatures low. The wine is then aged for four years in oak barrels. The fruity nature of the wine is maintained by the winemakers’ decision not to fortify it with the addition of spirits. The result is an amber beauty, with floral and fruit aromas still intact but seemingly floating in melted chocolate and smooth caramel. Tsiakkas Commandaria is delicate, refined and impossible to resist.

Orestis Tsiakkas also let us sample a unique Terroir xynisteri. This wine is an experimental bottle. In fact, no more than 50 exist and they are not available in any wine shops. Xynisteri is a Cypriot white varietal that tastes refreshing and citrusy – perfect served chilled on a hot Cypriot summer night. The Tsiakkas Xynisteri available in most wine merchants on the island is a common expression of this varietal. However, the select bottle was a revelation: more delicate and with an enchanting fleeting aroma of white flowers, this Tsiakkas Xynisteri select bottle is different. And it is worth visiting the winery just to sample it.

The Tsiakkas Family are clearly committed to high quality wine-making and every viticulture and viniculture decision they make reflects this. They are also warm and welcoming to all. Visiting this winery is fun, educational and downright inspiring!