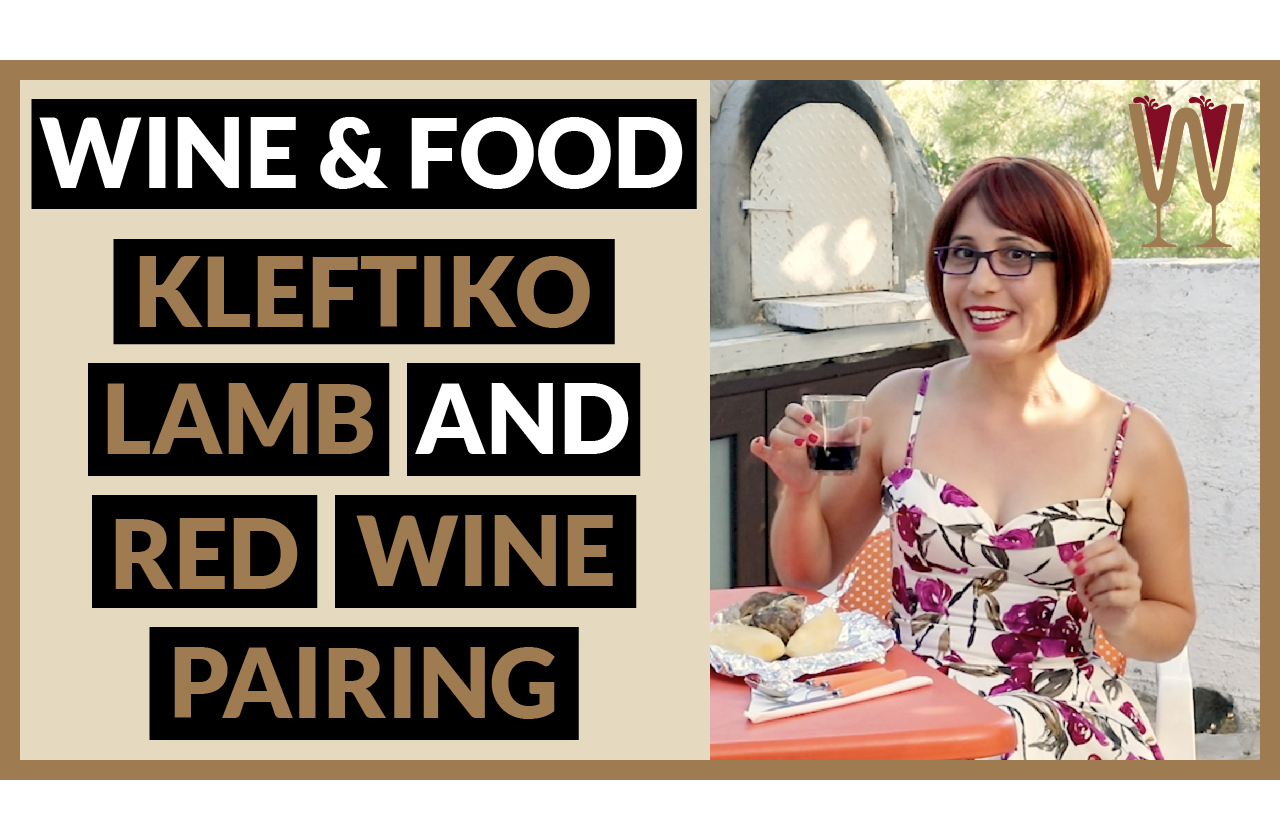 To find the correct wine for lamb, first we must consider how the lamb was cooked. In this case Greek kleftiko lamb shanks are slow cooked in the traditional kleftiko oven. In this video we find out: what is kleftiko, what is the meaning of kleftiko, and we discuss a kleftiko recipe. Enjoy as we compare two top Cypriot red wines with the lamb kleftiko meal: a Kyperounda Cabernet Sauvignon 2014 and a Vlassidies Shiraz 2016. The pairing is exquisite!

Which wine pairs best with the Cypriot classic slow-cooked lamb known as kleftiko?

With the roast, we have two incredible Cypriot red wines, a dry Cabernet Sauvignon by Kyperounda Winery and a dry Shiraz by Vlassides Winery. We are going to find out which of these two Cypriot red wines pairs best with slow-cooked kleftiko lamb roast. And make sure you stick around until the end for a fun story of how this ‘lamb kleftiko’ originally got its name.

Hey Tasters, this is Annabelle McVine. Welcome to the WineScribble Youtube Channel, the home of “Wine Applied”. So first, let’s look at our tasty lamb kleftiko.

This traditional roast does not make a big fuss of itself. It is seasoned simply with just salt and pepper. A few garlic cloves and bay leaves are pushed between the chunks of lamb and potato slices. Everything is anointed in golden olive oil, wrapped in parchment paper or foil and left to their own devices in a dome brick-and-clay oven for hours. Like this one right behind me.

The lamb will not burn or dry out. It will sit and wait till hungry guests are ready to tuck into their tasty parcels like excited children on Christmas morning. The excitement is justified. After hours in the oven, cooked by gentle residual heat, the lamb comes out meltingly sweet and so soft you can serve it with a spoon. Each piece of lamb rests alongside a few slices of potato, which thirstily soak up all the juices from the lamb, turning into salty, waxy flavour bombs.

And what about our two Cypriot wines. First we have the dry 2014 Cabernet Sauvignon by Kyperounda Winery. Aromas of plum and black currant fruit float upwards. They are immediately underlined by pungent herbal and forest notes such as mint and pine. A light sprinkling of five-spice. Well structured tannins and moderate acidity round everything off.

Our other red wine is a 2016 Shiraz by Vlassides Winery. This wine has a striking deep purple colour. It tastes of both dark and red forest fruit, particularly blackcurrant and cherries. There is a distinct black pepper note and general spiciness but it is perfectly in harmony with the other aromas. It is smooth and well-balanced, with round and smooth tannins.

Which wine pairs best with kleftiko lamb roast? I cannot for the life of me make up my mind. I love them both! Can you help me? Please let me know whether you prefer Cabernet Sauvignon or Shiraz with roast lamb, in the comments section below. Right now, I feel, if I can enjoy both, why choose?

How did Lamb Kleftiko get its name?

Lamb kleftiko can be translated as “the stolen roast” and it took its name from thieves, or ‘kleftes’, who lived in the mountains of Greece and Cyprus in the 19th century. They were notorious for stealing animals from shepherds. It’s hard to hide the fact that you have just fired up the barbecue, and if you have stolen the meat, that could get complicated.

These 19th century lamb thieves came up with an ingenious solution. They dug a hole into the ground or a into the side of a hill and burned wood in the hole until it reached a very high temperature. They would then bury the lamb, cover the hole with a rock and seal it with mud. Then they left the meat to cook slowly with the residual heat over the next 8-12 hours. This method allowed no smoke or aromas to escape because in this case, the incriminating evidence likely to give the lamb thief away was not so much a smoking gun as a smoking BBQ.

A more modern cooking method that mimics the one used by the thieves gives similar results today, and is as popular as ever across Greece and Cyprus. A dome-shaped brick-and-clay oven is packed with burning firewood and brought up to temperature. When the wood has burned down to white-hot embers, the oven receives a metallic tray overflowing with lamb-and-potato foil parcels.

The oven is then closed with a stone and sealed with mud, for hours. Four to six hours later when everybody is hungry, the mud is scraped away from the stone, the stone is removed and the oven is unsealed. Typically every guest receives a foil packaging containing lamb and potatoes. The meal is served with a large Cypriot salad and tomato-flavoured bulgar wheat.

The resulting melt-in-the-mouth lamb is identical to the original kleftiko and still bears the same name. The main difference is that the lamb is generally purchased rather than stolen these days. This is just as well, because even if you manage to keep the fact you are cooking a lamb roast a secret from your neighbours, as soon as that oven is unsealed, they will all be popping in to ‘borrow some sugar’.

So, Tasters, If you liked this tasting video subscribe, click on the ‘like’ button below to let us know, and please share it with your friends. Tasters, Remember, those who drink get drunk. Those who taste, feel sublime. I will see you on the next video.